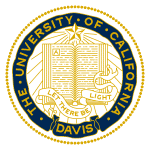 INTRODUCTION
Thrush and white line disease are common and recurrent infections that affect horse’s hooves. Thrush is a disease of the frog caused by the bacteria Fusobacterium necrophorum, also known to cause foot rot in cattle and sheep (Ozgen, Cengiz et al. 2015) and produces black necrotic tissue. Thrush can also manifest as white crumbly frog tissue, perhaps due to infection by the yeast Candida albicans. White line disease can produce an unstable hoof capsule as it destroys the connection between the hoof wall and the live hoof tissue, and is thought to be caused by both bacteria and fungi (http://www.equipodiatry.com/article_white_line.htm).

No Thrush is a powder that can be used on the frog and white line to control thrush (http://www.thehorseshoof.com/pdf_articles/FrogSeries3A.pdf) and equine fungal skin infections like pastern dermatitis (http://www.nothrushshop.com/treat_scratches.html). My hypothesis was that Equinell™ would be as efficacious as No Thrush in controlling thrush in frogs and improving the health of the white line on horse’s hooves.

METHODS
Two horses were treated with both No Thrush and Equinell™. All treated hooves were picked clean once daily with a hoof pick and a stiff brush (and washed clean on occasion) regardless of whether they were treated or not. Surface thrush on frogs was conservatively trimmed off using a hoof knife. Hooves were trimmed every 3-9 weeks. Both horses were housed at the same facility in 11×12 ft stalls with 32 ft run-in yards. Stalls were cleaned at least once daily.

At the start of the experiment, Horse 1 had healthy hooves and hoof walls but thin shallow frogs that regularly developed mild thrush. Horse 1 was exercised 5 days a week and turned out on pasture overnight every second day. The left front frog of Horse 1 was treated with No Thrush and the right front hoof was treated with Equinell™. Horse 2 had thrush in all four frogs and white line disease in both front feet and areas of weak/thin hoof wall.

Horse 2 was not exercised but turned out on pasture or in an arena for a 1-2 hours 2-3 times a week. The left front and hind frogs and white lines of Horse 2 were treated with No Thrush and the right front and hind hooves of Horse 2 were treated with Equinell™. No Thrush treatment regimen: No Thrush was applied daily for 15 days onto cleaned left hooves then a week later the 16th treatment was applied, then treatments were given monthly and as required when thrush or diseased tissue was found on the frogs (Horse 1) or frogs and white lines (Horse 2).

Equinell™ treatment regimen: Equinell™ was applied to right hooves on day 0, day 14, day 28 and then once a month, following the manufacturer’s instructions with the following modifications. Hooves were washed and dried before application if they were filled with moist manure. Following Equinell™ treatment hooves were placed into Davis soaking boots overnight to prolong the treatment time.

RESULTS
Horse 1: A total of 9 Equinell™ treatments and 65 No Thrush treatments were applied from January 17 to August 18, 2016. On January 20 a line was carved into the periople of both front hoof walls in order to monitor hoof wall growth. The rate of hoof wall growth was the same in both front feet from January 20 to August 17 (Figure 1) and the hoof wall quality did not appear to change over time with either treatment. Both frogs increased in size a little and looked very healthy at the conclusion of the experiment (Figure 2). However the incidence of thrush between February 17 – August 18 was 51 days on the left front (No Thrush treatments) compared to 29 days on the right front (Equinell™) (Table 1).

Horse 2: Treatments were applied from January 17, 2016 to January 16, 2017. The extent of the initial thrush infections was only revealed several weeks into the treatment period. Black necrotic frog tissue was cut out of the right hind in the first week and bled a little in the 3rd week when the hoof pick was used too vigorously. Additional treatments of betadine scrubbing to clean the hole and application of cotton pads over the hole were used in addition to a protective boot until the hole grew out a little (February 8 to March 9).

One month after starting treatments, following a trim, it was observed that there were also deep holes under the frogs, in the collateral grooves, on the left and right front hooves and the left hind. Over the course of the year, these holes grew out and the frogs became fuller with more defined and larger heel bulbs on front and hind hooves (Figures 3 and 4). Some growth rings were observed on March 29 2016 on the right front and right hind hooves (data not shown), indicating the new hoof growth was changed in response to Equinell™. However, this visual difference between the Equinell™ and No Thrush treated hoof walls was not apparent over the long term (Figures 5 and 6).

The incidence of thrush between March 9 – November 30 was 104 days on the left hooves (No Thrush treatments) compared to 33 days on the right hooves (Equinell™) (Table 2). Wall thickness was not improved by either treatment regime (data not shown). The depth of the medial and lateral holes in the white lines on the medial and lateral hoof walls from Feb 10 2016 to Jan 15 2017 were decreased by 6.25% and 31% in response to No Thrush treatment, and 31% and 62% in response to Equinell™ treatment (Table 3).

Table 1. Incidents of thrush in Horse 1, treated by removal of diseased tissue and/or No Thrush (left front) and/or monthly Equinell™ (right front)

Table 2. Incidents of thrush recorded in Horse 2 from the day the right hind was taken out of the protective boot (March 9th 2016) through November 2016. Thrush was treated by removal of diseased tissue and/or No Thrush as required (left hooves) and/or monthly Equinell™ (right hooves).

The frogs treated with Equinell™ were resistant to developing thrush as evidenced by the 43% less incidents of thrush in the right front hoof of Horse 1 and 68% less incidents of thrush in the right hooves of Horse 2. Equinell™ was more effective than No Thrush at reducing the severity of white line disease in Horse 2 as measured by a greater reduction in the depth of holes in the white line. 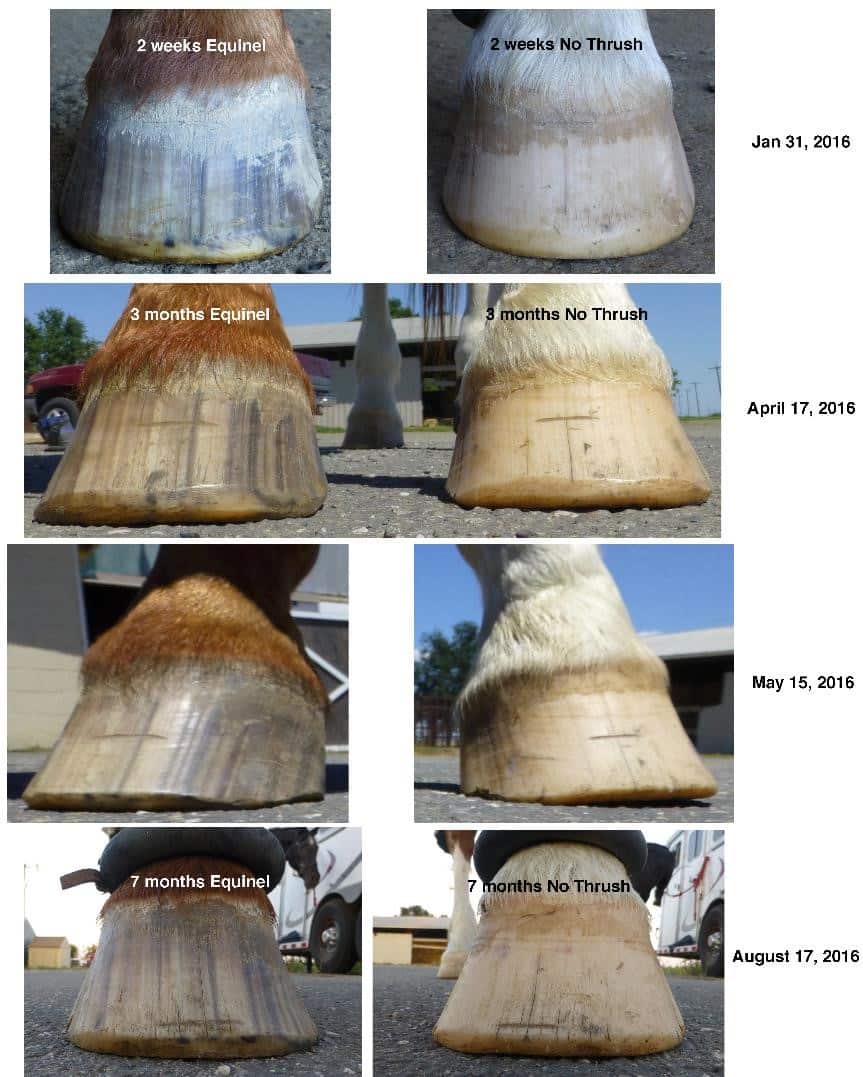 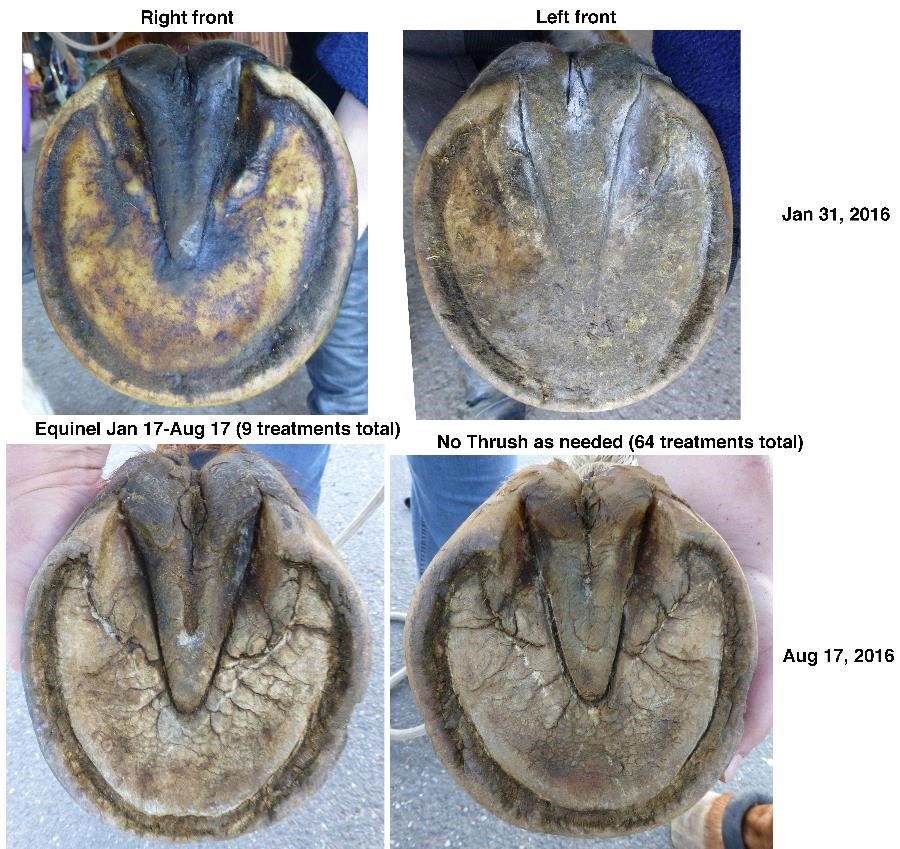 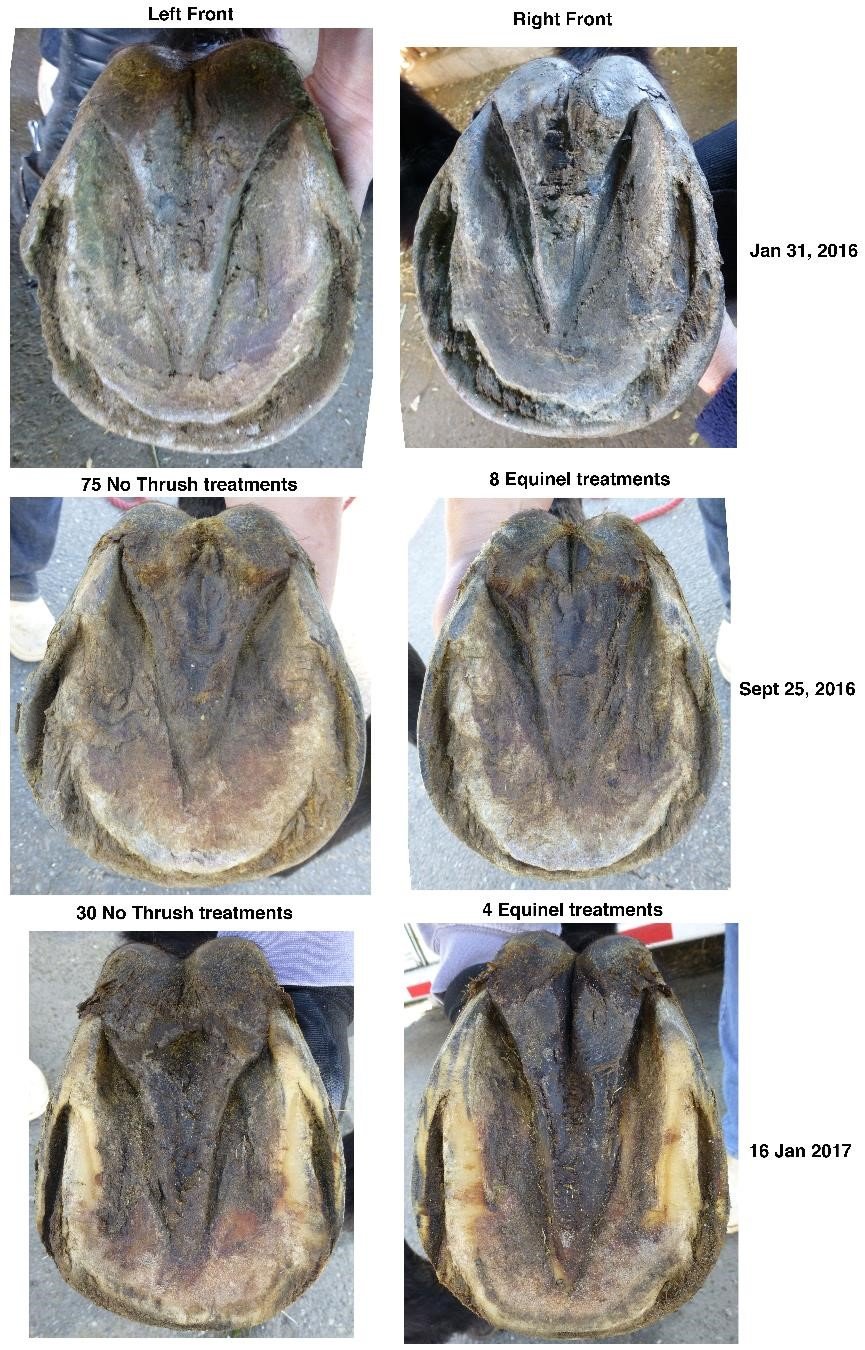 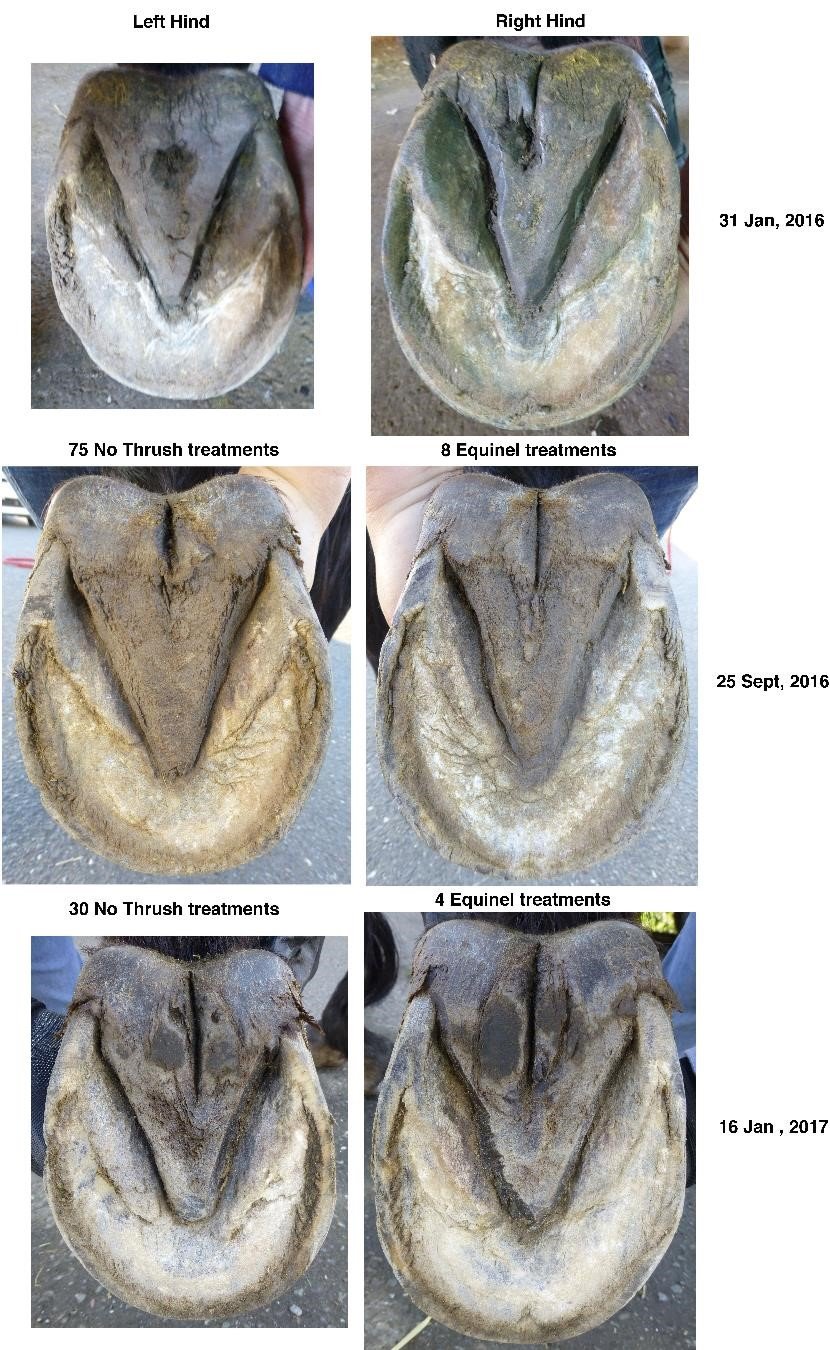 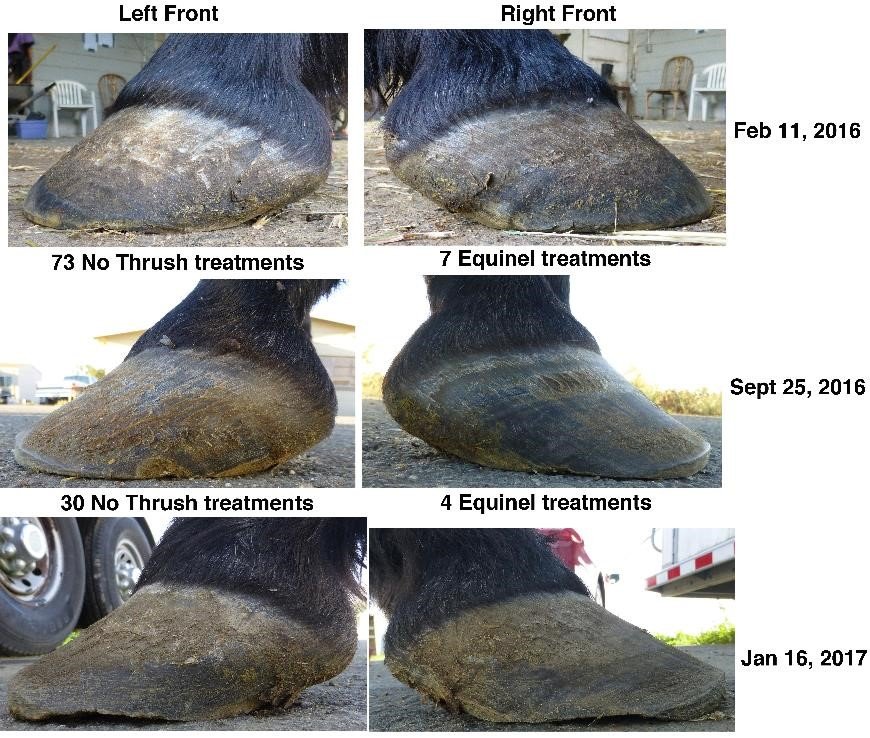 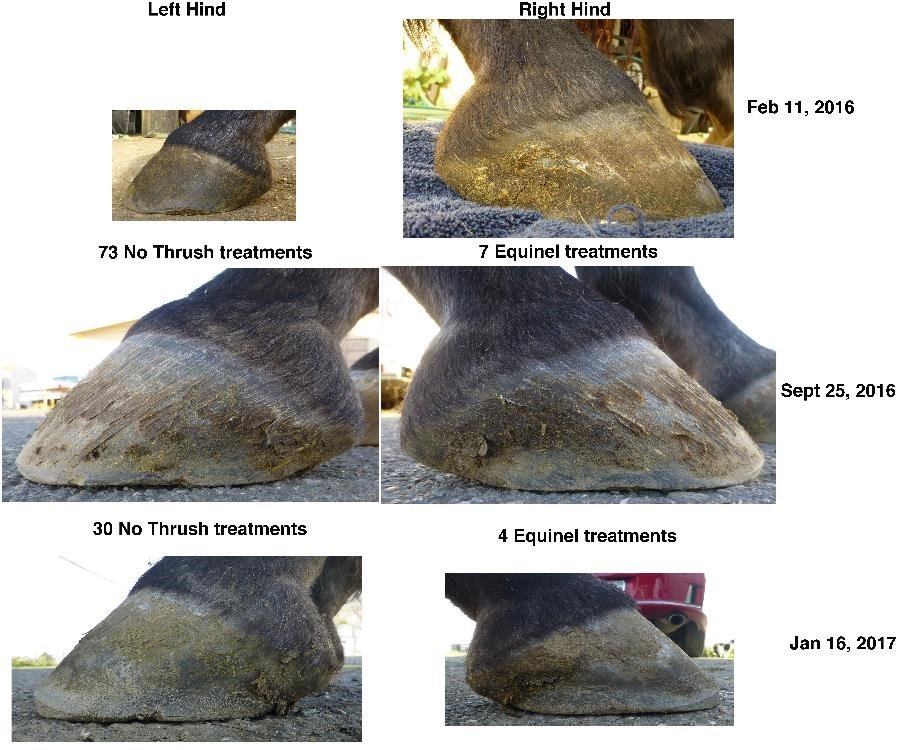 Download Full Study
Comparison of Equinel and No Thrush treatments on the health of frogs and white lines in the hooves of two horses ultima modifica: 2018-10-13T03:45:05-04:00 da Administrator

Healthy Steed is dedicated to getting the most out of your pet or performing animal, allowing you to really enjoy your horse the way you ought to be able to, making your horse happy and comfortable.

Equinell™ products are not medicines and are not intended as a substitute for veterinary care.

Putting Spirit Back into Your Horse